My City – The Future for Dublin

I’ve spent the last three months working with the good people at Noho in Dublin to bring together a permanent exhibition for Dublin City Council. The “My City” exhibition space provides a means by which the council can communicate their plans, objectives and motives in developing Dublin City into the future. 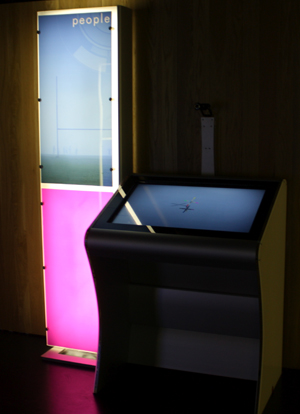 The application is flexible… videos can be added and removed with a simple change to some XML. A management tool is an option for the future. All the work was done in Flash CS4 using ActionScript 3.0, the final product was compiled using NorthCode SWF Studio.

Other functionality required by the creative director on the project included a content managed application (accessible from within the video kiosks app) which would allow users browse development plans and other information as it is made available by the council.

This was developed as a separate Flash application, which can be loaded and unloaded by the video jukebox, a function which makes the basic video player infinitely extendable. Content management was handled by Expression Engine running on the incredibly useful XAMPP (Apache/MySQL/PHP) platform. 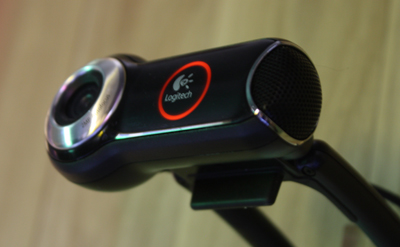 A video feedback function (video recorded using a webcam attached to each kiosk), utilised the excellent Red5 open source alternative to Flash Media Server. The application uses a MySQL database to tag and moderate videos as they are recorded by visitors to the exhibition. Working with Red5 required me to dip my toes into the world of Java development for a brief spell! 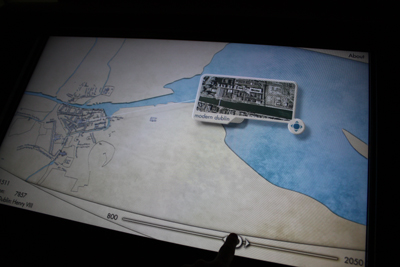 Finally, and perhaps most interesting, the team at Noho have a map of Dublin, built in 3D which recreates the growth of the city over the past 1200 years and forwards until 2050. I built an application using Flash CS4, Arduino (with the excellent AS3 Glue API), and a linear potentiometer, which allows the user to drag a physical slider and view the city as it grows along a timeline. As you explore the city’s history, you can touch the screen at any time to reveal a section of the city as a satellite photograph… comparing the past with today’s reality.

Unfortunately, damage done during construction work has broken the timeline, but while we wait for replacement hardware, a touch screen alternative has been installed. I’ll post news here once it’s fixed! Likewise, I hope to document the ins and outs of my development experience on each of the above apps, over the coming weeks

My City is open to the public right now (Monday to Saturday), at the Dublin City Council Civic Offices, Wood Quay. The official opening is set to take place later this year.

[update] The My City exhibition was closed by Dublin City Council sometime in 2014 by my best estimate.

A Step Backwards for Dublin this Christmas

MyCity – The Future for Dublin