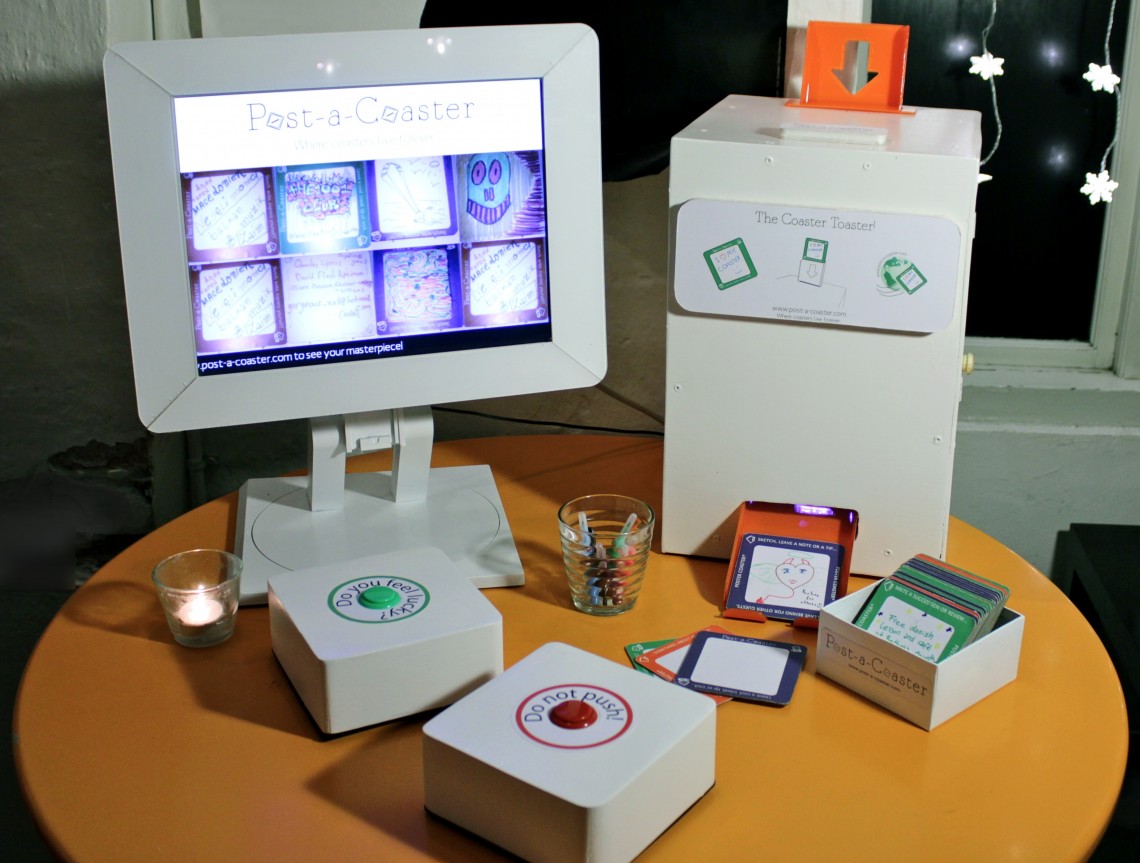 “And now, the end is near, and so I face…” I think I’m actually starting to go a bit mental. Someone told me the other day that I looked thirty-five. That was all I needed. It’s been a good week though. Picking up from where I left off, last Monday I took a cab to Sleep in Heaven with the newly named “Coaster Toaster” and screen. To my surprise, it sat without crashing for almost the entire week, happily uploading about 50 scanned coasters.

People at the hostel were impressed, a few guests commented with some nice feedback, some of which I was lucky enough to get on camera. Mostly though, this week is for collecting video of that kind of feedback. Interviews and suggestions, trying to tell the story right back to the research phase.

Alongside that, I have a lot of work to do preparing the website (service layer) so that it demonstrates more of the possible functionality I’ve proposed. This will include tagging, filtering and a nicer GUI, I hope.

Of course, there’s the second concept – the boxes, which I took to SIH on Friday with the help of a whole bunch of classmates and faculty. We had a difficult time finding the ideal opportunity to test the boxes, having only two means the need to predict the places where people will sit. This was near impossible. At one point, someone did push a button, but unfortunately there were people sitting near, but not at the second table. Also, the ambient noise on a Friday night was such that a lot of the effect of the buzzer and escaping marbles from the box was lost.

Regardless I got an interview with the girl who hit the button, got some feedback, and wrapped up for the night with a few beers with my classmates. I miss beers. We’ve all been working too hard.

The bulk of the rest of the week was spent struggling with XBees (trying to create a mesh network, lacking the expertise and time) and visiting SIH to check on the coaster toaster, stock them up with pens and coasters. New coaster designs don’t feature much direction as to the content which should be provided. This has had a negative effect on the value proposition. I’m getting less and less useful suggestions and content. I’m going to iterate one last time, creating a couple of new formats and putting them in the hostel early next week.

Finally, on Sunday night, I spent a good few hours workign with some lovely people I found relaxing in the lounge. I shot a bunch of video and photos capturing the context and the concepts for inclusion in a bigger video presentation to be part of the final delivery.