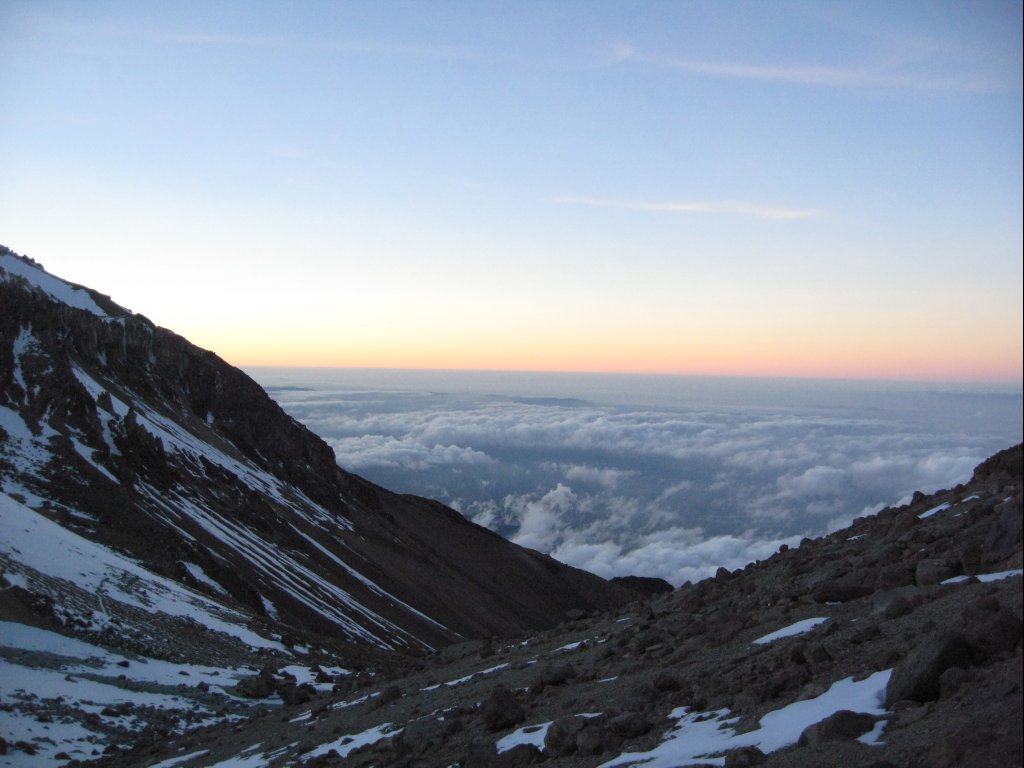 The following is a piece of travel writing completed for the Irish Independent in 2008 while I was travelling in South America. It was never published, and I recently dug it and three other pieces up from an old hard drive.

“If you’d like to do something, more suited for your age…”, said the tour agent as our small group of twenty-something’s booked a tour from Arequipa to the natural wonder of Colca Canyon. A shrewd salesman, the seeds were sown in our minds that we needed a challenge, but a trek to an altitude higher than that of Kilimanjaro is not, perhaps, something one should buy on impulse.

Arequipa, Peru’s second city and self-declared capital of style, lies in the southwest of the country. Daily buses take hundreds of tourists to Colca Canyon where they endure contrived “traditional” dance shows during “typical” buffet dinners and enjoy beautiful panorama’s of pre-Inca settlements, under the watchful eye of the magnificent Andean Condor. After an overdose of cruise-ship hospitality we returned to the tour-agent to take his challenge… battling the peak of extinct volcano Chachani.

Billed by the Lonely Planet as “one of the easiest 6000m peaks in the world”, Chachani, at 6065 metres, is the tallest of several peaks that once formed a mammoth volcanic vent, thought to have lost sixty percent of it’s height to erosion. The snowy peak lies on the geographic fault line that gave birth to the Andes and is next to El Misti, a smaller, but more renowned dormant volcano which threatens the ever-expanding city that lies in its shadow. Expeditions to both mountains leave Arequipa daily and tour agents stress that no experience is necessary, providing equipment, including ice-axe and cramp-ons, for an all inclusive price.

The itinerary for an expedition to Chachani generally stretches over two days. Toyota Land Cruisers collected the group on the morning of day one as a four wheel drive is absolutely necessary for the two-hour dirt-track journey from Arequipa to the lower of the two base camps on Chachani. Guides will speculate as to which of the two camps better suit a particular group. This decision can be based on anything from the spaces available at each camp to the first-impressions as to the abilities of the group and how well they may already have acclimatised to altitude.

Our guides took the decision to start from Base Camp One, at an approximate altitude of 4800 metres. Having set up camp and enjoyed a hearty chicken and vegetable broth, we took a leisurely stroll to the second base camp, 600 metres higher, and back down. This is in keeping with the policy of “climb high, sleep low” trusted by mountaineers as a technique to aid acclimatisation.

“Sleep” however, is not necessarily the appropriate word, as after a pasta dinner the group of soon-to-be mountaineers were instructed to turn in at the unusual hour of 7.30pm, a good few hours before the average biological clock will allow for a decent amount of shut-eye. And so, a peaceful rest, but hardly any sleep, was obtained before the wake up call at midnight, which allowed for a light breakfast and kitting up for the climb.

Departing at 1am, the first section of the climb was familiar from the day before but the spectacular display of stars in the heavens and the slowly rising moon which illuminated towering snow-covered slopes above made for an entirely more invigorating experience. So beautiful were the views that stargazing distracted from the insidious effects the altitude was already having on the bodies of us climbers.

Not long after passing Base Camp Two, and about two hours into the trek, our guide stopped the group for a short rest and we were instructed to unpack our ice-axes for the next section of the hike. The entirely new experience of picking one’s way across a 60 degree slope covered in snow was, ironically, somewhat aided by the cover of darkness. Had we been aware of the massive icy drop above which we were precariously balanced at the time, a quick u-turn might have been made straight away. Thankfully only the pristine snow that surrounded one’s feet was illuminated by the tiny head-lamps provided by the tour company.

The second section of the climb took less than two hours, but already the altitude was telling on the poorly acclimatised members of our group. We navigated a pass below the peak named “Fatima”, traversing a snowy slope which, for the most part, was actually downhill. Footsteps became short and breath became shorter as bodies began to crave vital oxygen, the supply of which is reduced by almost 50 percent at such altitude. Trudging along in the dark, members of the group fell silent one by one as we each took refuge in our little islands of light in the snow, observing the hypnotic movement of footsteps and consciously regulated breathing.

Before sunrise, the route provided the opportunity to look South, over the glistening expanse of Arequipa in the distance. Ignorant of the gaping void below us, everyone took a few moments to sit in the snow catching their breath, a sup of icy water (everything, it appeared, was freezing up) and a photo of the beautiful scene. As we struggled back to our feet, the sky over the mountain peaks began to brighten as the sun approached a horizon to the East, far beyond our view. It would be a few hours before its warming rays would begin to defrost our water bottles and noses.

The trek, were it not at almost 6000 metres altitude, could easily be completed by even the most inexperienced of hikers. The only technical challenges are on the snowy slopes, where your guide picks the path and the group simply follow in his footsteps. We pressed along a meandering path up a steep slope, the surface varying from volcanic sand to crisp snow. What should have been a routine stroll was proving incredibly difficult for every member of the group due only to the adverse effects of altitude. Every footstep was an immense effort, tempers frayed and the desire to sleep was overpowering, especially as the warm rays of he sun began to defrost the mountainside. Constant hydration was absolutely necessary but the effort of simply taking a drink often seemed too much to expend. 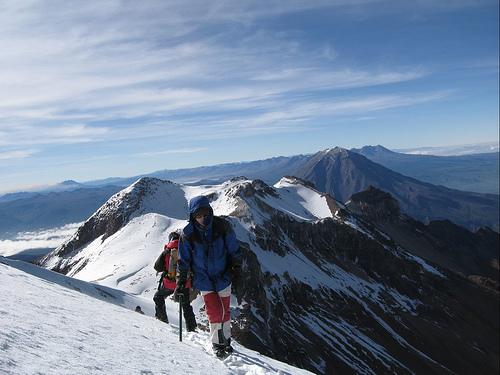 Nine long hours after leaving base camp, the peak of Chachani crept into view and with it, a tiny quantity of reserved energy, just enough for the last leg, mustered from some secret place within. Every aching step and gasping breath of the nine hour hike was instantly forgotten at the summit. Standing on what was easily the tallest platform in view, among a range of many mountains, the sensation of being above everything on Earth is indescribable. One by one, members of the group arrived to the summit to the applause of those who had already completed the ordeal of the hike, and were savouring their reward.

Chachani had proven to be twice the challenge we were promised. A must for any experienced mountaineer on a visit to Peru, our expedition proved it is achievable to the common tourist with a reasonable level of fitness on their side. It does, however, demand the utmost respect in terms of preparation and acclimatisation. Use the days beforehand to undertake some of the many other high-altitude treks in the area, it can only be of benefit. Altitude sickness can result in sudden death, so the symptoms should be taken seriously but if you don’t get caught, you’ll thank yourself for acclimatising, especially when you turn heel on that spectacular summit… and begin the long hike back to camp.

Discovering Darwin on The Galápagos Islands