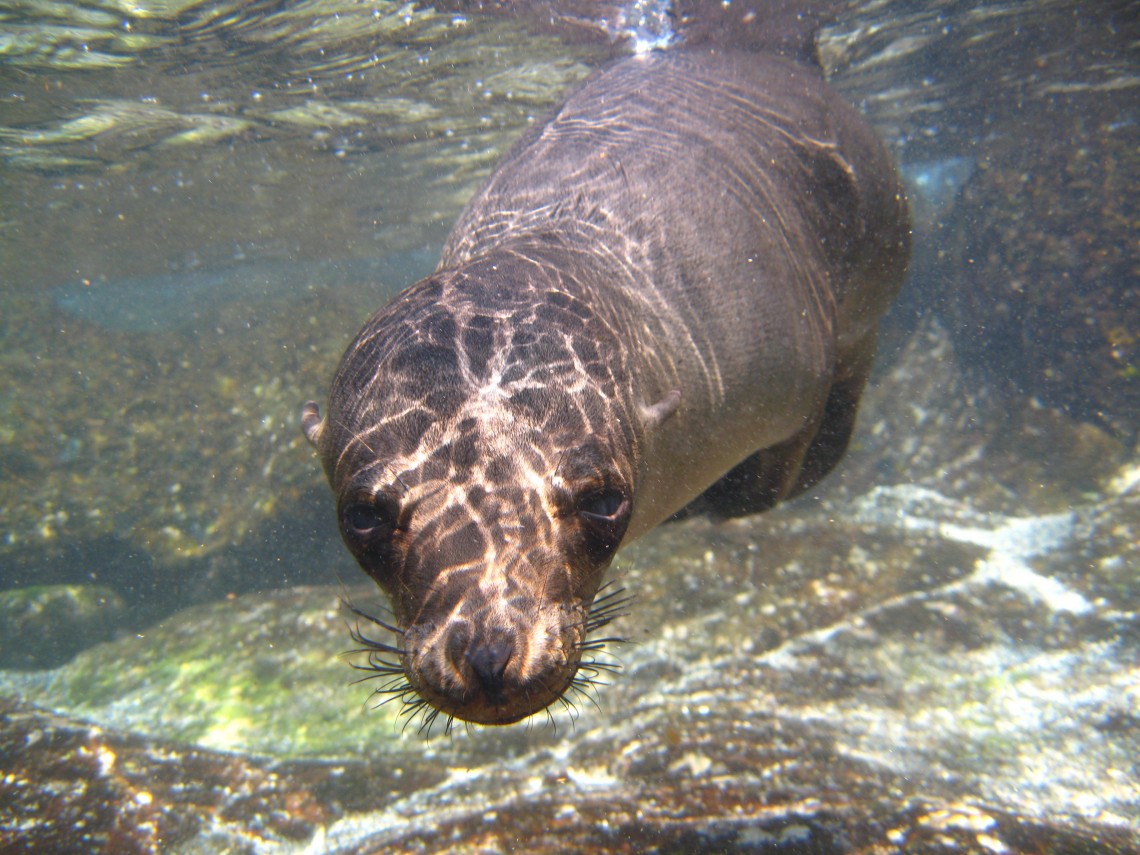 Discovering Darwin on The Galápagos Islands

The following is a piece of travel writing completed in 2008 while I was travelling in South America. It was never published, and I recently dug it and three other pieces up from an old hard drive.

The age of global tourism has meant competition for that elusive “must see” status. While destinations around the world are building bigger hotels, plusher resorts, and promoting deadlier pursuits for adrenaline junkies, it’s reassuring to know though that on a tiny collection of islands near the Equator, Mother Nature still has a go at beating all man’s artificial attractions into insignificance.

The Galápagos Islands are off the coast of Ecuador. Most visitors fly from the capital, Quito, arriving on Baltra Island after a chaotic check-in and screening process designed to protect the habitats on the islands from invasive species. The best way to see the islands is on an island-hopping boat trip and live-aboard yachts range from extravagant luxury to steerage class. Almost everyone is greeted by a guide at the airport.

The island’s wildlife (especially avian) is credited with provoking Darwin’s proposal of the Theory of Evolution. But to the average tourist, not knowing rare finches from each other, the creatures of Galápagos have one most endearing quality… their near complete lack of fear around humans. Within minutes of leaving the airport, adult sea lions can be seen lazing in the shade on and around park benches at the harbour. They simply sleep while tourists step gingerly around and over them to board boats.

There are twenty-two islands, some of which are closed to the public, but the pace with which the tour began told us we’d be seeing most of them. The first stop took our breath away as we explored Mosquera Island, nothing more than a sand spit, but home to hundreds of inquisitive sea-lions and beautiful sunset coloured crabs that explore rock-pools. On the rocks, marine Iguanas bask in the sun, warming up before their sub-aqua feeding trips beneath the gaze of huge hovering frigate birds. 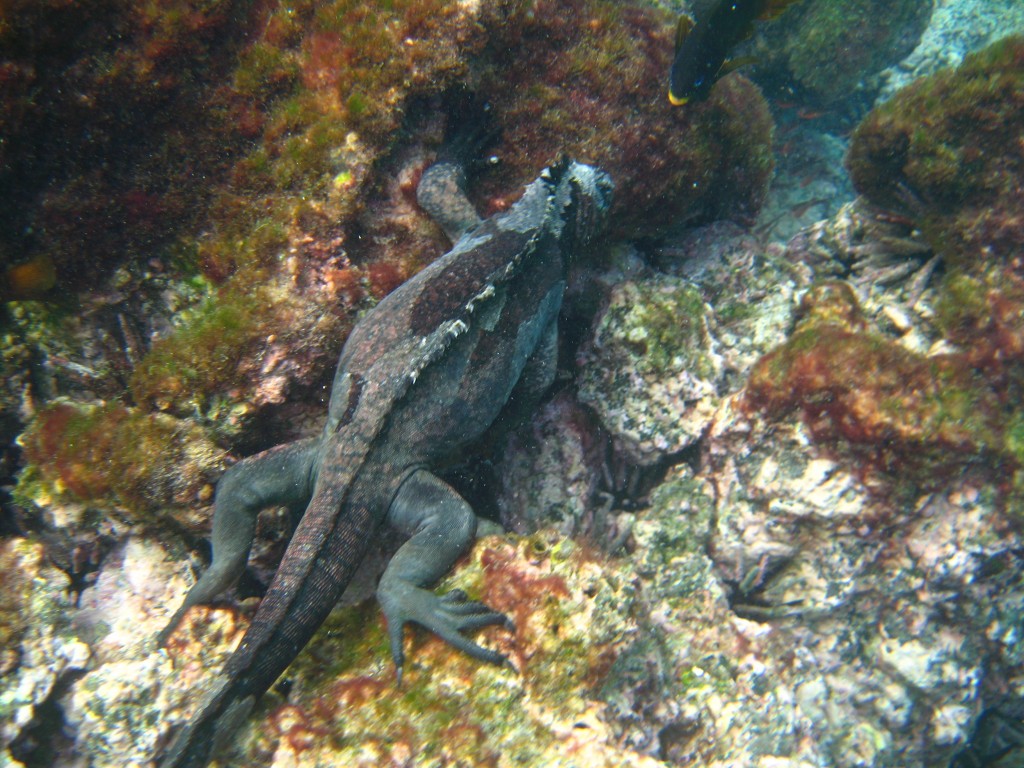 It’s difficult not to be overwhelmed by the proximity of the bulky sea-lions, but the only danger is from potential scuffles with the males. Luckily, they are positively sluggish on land, but it’s not advised to get too close. Time flies as your imagination is captured not just by the beauty of the wildlife, but its abundance. Nevertheless, with an average of two islands to see per day, our guide hurried us back to the yacht where we ate a hearty lunch on the way to our second stop.

What you see above ground is only a small fraction of the spectacle here. As soon as you don a snorkel and mask, the variety of living things explodes before your eyes. At almost every stop you have the opportunity to swim with graceful sea-turtles, unique and tiny Galápagos penguins, sharks, stingrays and countless species of beautiful tropical fish. If you’re lucky you’ll catch a glimpse of those marine iguanas, as comfortable grazing on mosses under the sea as they are lazing in the sunshine above. Sea lions persist in chasing down tourists for play, in fact, so tireless are these graceful attention seekers that once the initial novelty wears off you’ll find yourself wishing they’d give you a break, and let you see something you haven’t seen before! 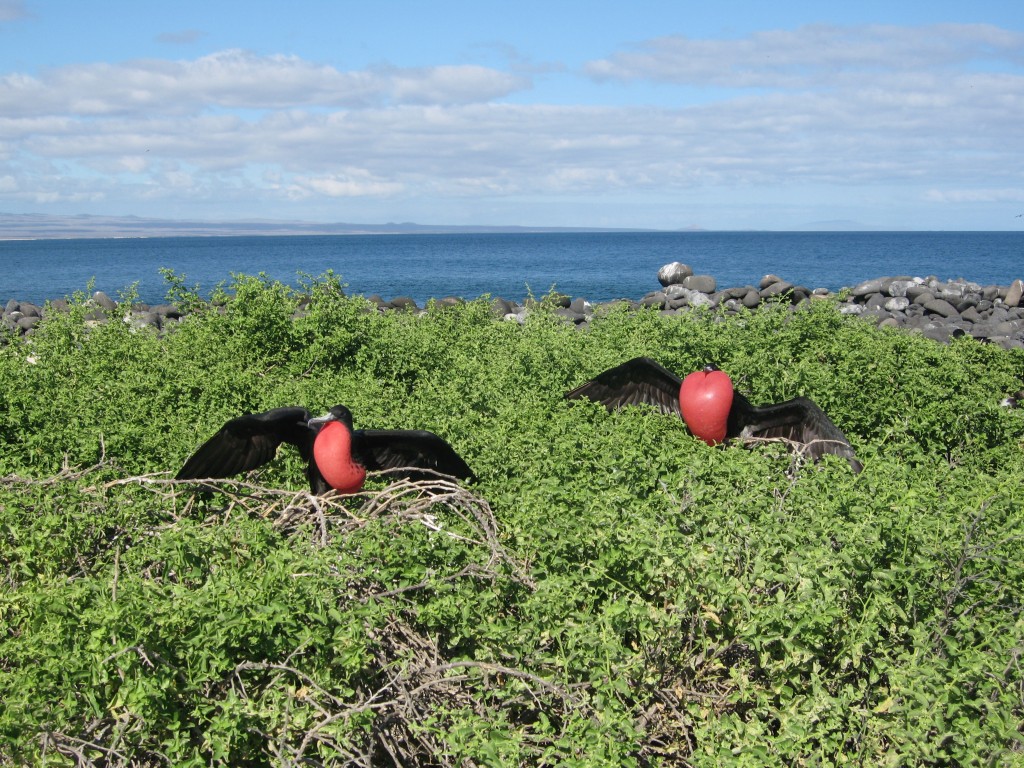 Most boat trips last eight days, and stop for nearly two full days on the main island of Santa Cruz. The largest town on Galápagos, Puerto Ayora, is situated here, with the population on the island being around 20,000. The town is busy with tour agents, souvenir shops and bars. It is heavily developed and populated, but you can still spy pelicans, frigate birds, finches and the ubiquitous sea-lions in the harbour.

Some visitors opt for shorter tours that finish here, but for others the trip to the town gives an opportunity to see the famous Giant Land Turtles who have been accommodated in a sanctuary on the outskirts of town. The sanctuary, or “Darwin Station”, is the home to “Lonesome George”, a giant turtle who is the last male of his species [since deceased]. For decades, volunteers at the centre have kept him in close proximity to two females in the hope of some action. It was difficult to resist whispering in his ear “Get your act together!”.

Puerto Ayora is also the place to book some scuba dives, if you have the appropriate qualification, as after your tour it would be a shame to miss some of the world’s most exciting dive sites.

The whistle stop tour of the islands continues with every one providing a unique landscape and variety of wildlife. From the lunar desolation of raw volcanic rocks to lush naturally irrigated farmland, dazzlingly white coral-sand beaches to volcanic cones and more.

Tourism on the islands is regulated by INGALA, the state authority for the islands protection, and guides are all graded and qualified to practice on the tours. Our 78 year-old guide, Cesar, was as nimble as a man half his age, but carried with him the history of the young islands, and brought each to life with a charming story of past inhabitants, or of how places got their names.

The natural beauty of the place is a match for any architectural triumph of man, the character and variety of the creatures who live here provide drama and comedy to beat some of the best entertainment on Earth… but what of the adrenaline junkies fix? What has mother nature provided for the adventurous tourist?

While the islands lack the likes of roller-coaster white water, a real adrenaline shot can be found beneath the waves of the Pacific Ocean where divers can explore caves of volcanic rocks and labyrinths of lava tubes. Submerged cliffs form drop-offs of dizzying height with ocean currents pulling divers, as if in flight, at a vertigo-inducing altitude above the sea floor. Visibility extends for tens of metres as water is filtered by the volcanic rock. But the real buzz, once again, is provided by the wildlife. 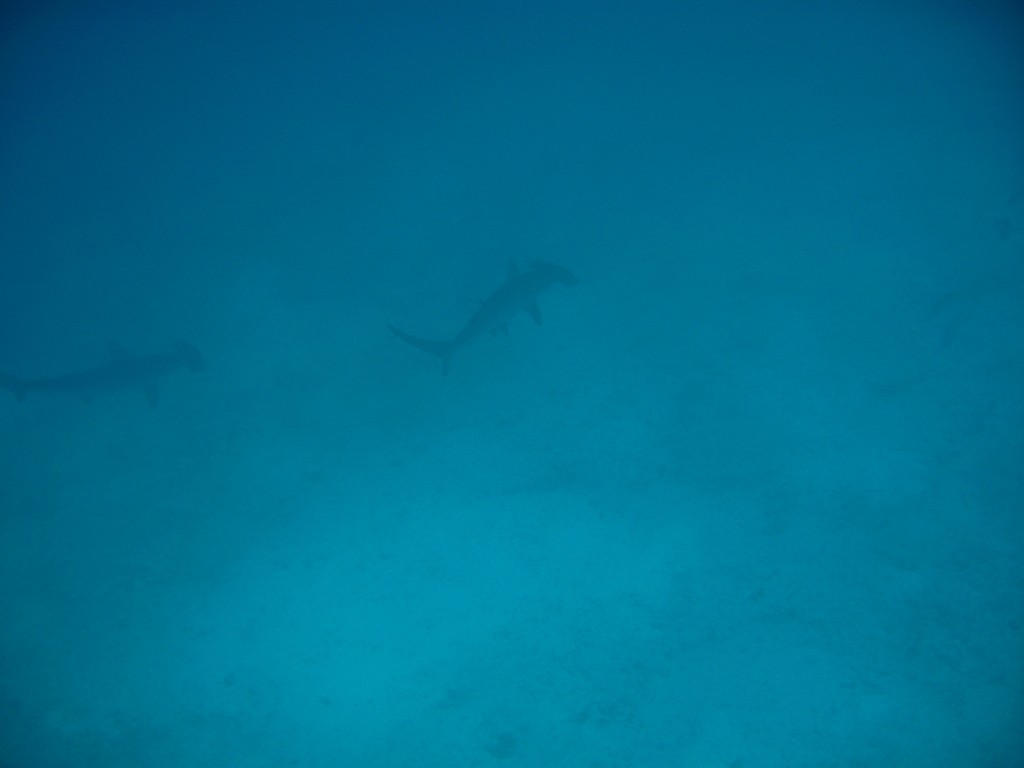 Imagine the silhouette emerging in the distance of a chunky hammerhead shark, then count the shadows as two, three, five, ten glide by your company of wide-eyed, mesmerised divers. Alternatively imagine creeping into a deep cave to be among fifteen white tip reef sharks, each a metre and a half long, as they rest in the slowly flowing currents of the dark volcanic cave. In just two dives we had both of these experiences, our guide, took it in his stride. Here, it seems, that’s all in a day’s work.

There’s also plenty of land based pursuits, including mountain treks, horse riding, volcano climbs and one or two huge dives from rocky ledges into beautiful lagoons.

The standard of tours on the islands is heavily regulated by the Ecuadorian government but the quality emphasis doesn’t put tours outside the reach of the budget conscious traveller. Tours are fully booked months in advance, especially for the high seasons (Irish Summer and Irish Winter) but can be explored and booked online. It’s important, as the standard of boats varies immensely, to make sure you’re getting what you want from a particular cruise. Cheaper boats, while safe, clean and perfectly hospitable, will lack facilities like hot showers and air conditioning. The smaller the boat, the more likely seasickness.

The Galápagos Islands are one of planet Earths’ great jewels. One for everyone’s wish list. Advice for the would be visitor includes bringing along a huge memory card for your digital camera, and a waterproof camera case for good measure. It’s a place that is difficult to leave and there is tangible emotion in the airport as tourists await departing flights. It was in the departure lounge, on my departure date, that I read a headline on someone else’s paper… Lonesome George had finally got his act together, and three eggs were collected and put into incubation! If we treat this paradise well, hopefully the magic will be preserved for many generations to come.