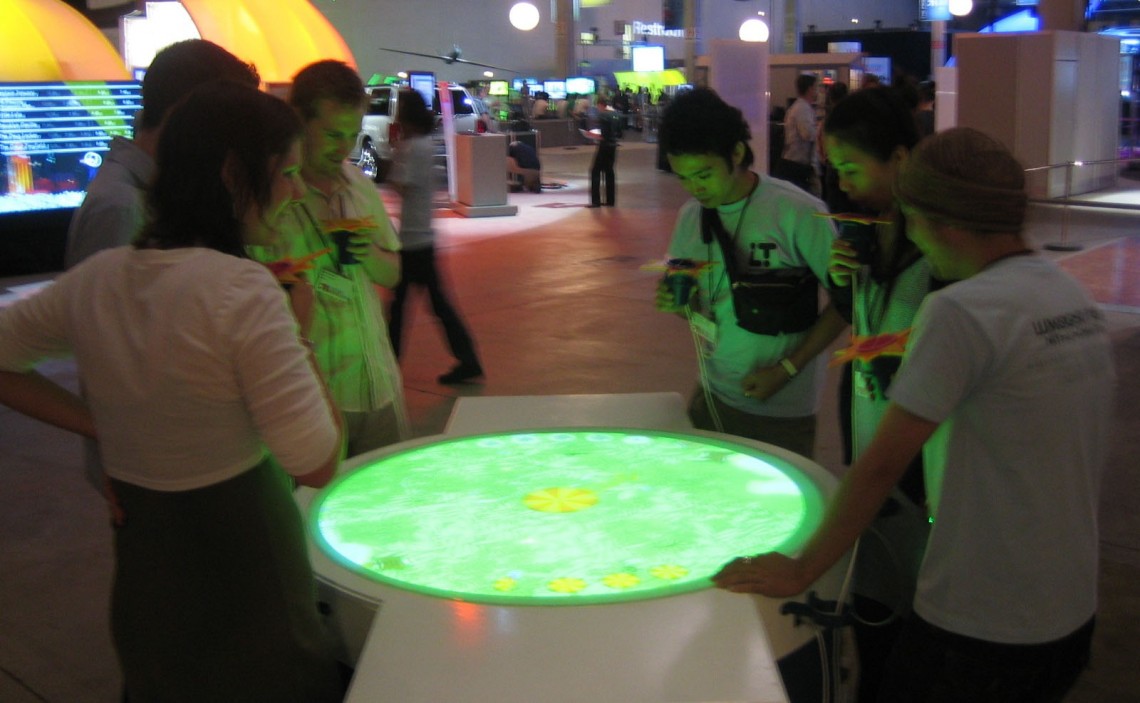 Happy Birthday to an Old Friend

After a conversation this week with Ciaran Vipond, it struck me that as we end 2009, I’ve failed to mark an anniversary of sorts this year. Personally it’s been five hectic years since graduating with a bunch of fine folks from Dublin City University, but this year marked another occasion worthy of note in these pages.

Back in 2004, during our final (BSc. Multimedia) thesis, a team comprised of Kevin Cannon, Nicky Kavanagh, Therese Veale, Ciaran Vipond and myself produced “Blowaway – The Winds of Therslow” and pushed the limits of our four years’ study, and our own expectations, right to the limit. Blowaway was a roaring success, and it’s something I am very proud of.

In a time before Wiimotes and multi-touch, when the button-bashers dominated the console market and the stereotype of the fat, lazy child gamer was dominant, the five of us asked the academic board in D.C.U. if we could conduct an “Investigation into augmenting traditional toys with digital media techniques”. They kindly allowed us to proceed… to this day I wonder if they knew how deep into the last-minute our pitch was dragged together.

We spent a couple weeks researching play and the role it plays in childhood development. We assessed existing toys as to their value in the many kinds of developmental play before starting our intensive brainstorming sessions. These were held in whatever room we could grab in D.C.U. The five of us tossed around ideas on blackboards, photographed our sketches and re-hashed ideas day after day in what was an exhausting process of, though we may not have known it, Interaction Design.

When production began, we each slotted into our roles, covering music and sound, graphics, hardware development, and physical design and construction. I took responsibility for software development and was nominated to manage the workflow of the project.

Blowaway, when completed, was a fully-functional arcade style video game, with it’s own unique control system, display setup, collaborative gameplay, and original music and visuals for four “worlds” in-game. “Betsy” as we came to affectionately call the 6.5 foot long installation was the proud product of our collective imagination, ingenuity, sweat and tears.

The project got us noticed. We were nominated for a Europrix Top Talent Award in 2004 (Vienna) and then invited by Wired Magazine to attend Nextfest 2005 in Chicago. Blowaway was exhibited in both places thanks to (respectively) the generous intervention of a Ray D’Arcy Show listener and funding from D.C.U. Subsequently, “Mark II Betsy” was taken to Copenhagen and exhibited at Next festival.

Entertaining visitors at Nextfest. Blowaway was exhibited in Ireland, the U.S., Austria and Denmark.

Betsy spawned a clone, and was exhibited a bunch of times in Dublin on top of the excursions abroad. To this day Blowaway impresses new people when I talk about how it worked, and show people the website which documents our work. “Betsy” is in storage now, I’m not even sure where… but I’d like to wish her a happy birthday, and thanks again to the team, all still friends, who made Blowaway a reality. www.blowaway.org

MyCity – The Future for Dublin